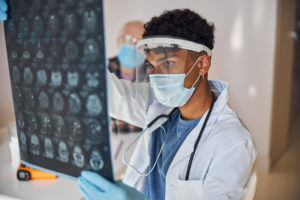 Seizures are one of the most visible signs of a neurological condition. They occur due to uncontrolled surges of activity in the nervous system. Most seizures resolve quickly and are caused by conditions that can be corrected. However, some are caused by more complex disorders, like epilepsy.

Understanding the type of seizures you have can help your doctor determine the underlying cause and get you the most effective treatment available.

The most widely accepted classification system for seizures splits cases into two categories based on the location of the electrical dysfunction.

Focal seizures involve excessive electrical activity in one part of the brain, meaning that the increase in activity is limited to the specific areas it occurs. On the other hand, people with generalized seizures experience chaotic neuron activity throughout many parts of the brain.

Focal seizures may cause a loss of consciousness. People who remain awake during a focal seizure can have altered awareness of their surroundings. They may fail to respond to people around them and stare blankly into space. While they may describe the experience similar to dreaming, patients usually don’t remember the seizure after it occurs.

The scope of the heightened electrical activity can impact the severity of seizure symptoms. Simple focal seizures, which involve relatively small parts of the brain, may only cause:

Meanwhile, seizures that involve multiple brain areas, such as complex focal seizures, can also cause:

Issues in specific areas of the brain can cause different symptoms. A focal seizure that originates in the occipital lobe, for example, can cause visual disturbances during the episode. That’s because this lobe is the part of the brain that processes vision.

Sometimes, localized abnormalities in neuron activity can spread to other areas. In these cases, a focal seizure can escalate into a secondary generalized seizure.

Patients experiencing seizures do not always exhibit visible signs. This lack of glaring symptoms is the case for absence seizures. Known traditionally as petit mal seizures, it causes people to develop an involuntary blank stare for several seconds. Patients are unresponsive to stimuli during episodes. They may also perform small body movements, such as rapid blinking or nodding.

While relatively short, absence seizures may occur hundreds of times for some people. This condition occurs most frequently in children.

Based on the name itself, tonic seizures cause increased muscle tone or tension. Patients experience a temporary stiffening of muscles. In particular, muscle groups in the back and the extremities are impacted frequently. The involuntary muscular contractions can:

In contrast, atonic seizures involve loss of muscle tone. Increased brain activity can cause the person to lose control over their muscles. As their extremities and core muscle groups become limp, the patient may also lose balance and fall.

Myoclonic seizures are associated with repetitive contractions of several muscles. The patient may have sudden and uncontrollable movements of their limbs. The face and neck are commonly affected. Twitching and jerking movements are readily observable and are signs most people associate with seizures.

Patients experience both stiffening and shaking, making body coordination exceedingly difficult. All limbs are usually affected, causing the person to lose balance and fall. When a person is having an episode of this type of seizure, they need support to protect their body. Tonic-clonic seizures cause the following symptoms:

During a seizure, it is critical for people nearby to observe the symptoms. This can help doctors understand the condition, generate an accurate diagnosis, and direct patients towards effective treatments.

The expert physicians at Associates in Neurology strive to make quality neurology care accessible throughout the Detroit region. Our board-certified physicians use the most advanced technology and offer state-of-the-art services to patients.