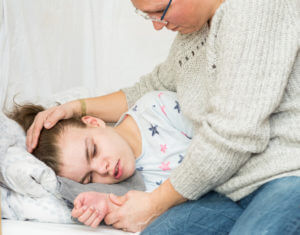 Seizures can affect your child’s life in many ways. They can also cause discomfort, fear, and worry for you as a parent. Seizures can’t always be prevented, but there are things parents can do to help manage the condition as effectively as possible.

THE DIFFERENT TYPES OF SEIZURES

Temporal Seizures: Seizures that start in the temporal lobe usually last only a few seconds, but when part of a syndrome, they can cause changes in personality and behavior. Sudden bursts of feeling scared, déjà vu, or euphoria are common. Repeated lip-smacking, swallowing, staring, and being lost in thought are common symptoms, too.

FACTORS THAT CAN TRIGGER SEIZURES

Seizures may be caused by several factors, such as sleep deprivation, stress, emotional trauma, or psychological disturbances. Seizures appear to be precipitated by environmental factors such as alcohol or drug withdrawal, oxygen deprivation (hypoxia), increased intracranial pressure (ICP), hyperventilation, and flashing lights. Seizures may also be precipitated by illnesses, such as an infection or fever.

HOW TO PREVENT SEIZURES IN CHILDREN

Seizures are an unfortunate part of childhood for some children. While seizures are often brought upon by conditions such as epilepsy, there are steps you can take to prevent them from happening as frequently. When it comes to preventing seizures, there is no one size fits all approach. Preventing seizures typically starts with diagnosing the underlying issue that is causing the seizure activity. Once you have figured out what’s causing your child’s seizures, you can begin taking measures to help reduce their occurrence.

THINGS YOU CAN DO IF A SEIZURE HAPPENS

Seizures can be frightening for parents. Here are some steps you can take if your child has a seizure:

ASSIOCIATES IN NEUROLOGY IN GREATER DETRIOT

At Associates in Neurology, we understand how nerve-wracking seizures can be. We are proud to have highly experienced and reputable experts on board to help diagnose and treat your child’s seizures. Call (248) 478-5512 to make an appointment. You can also request an appointment online. We look forward to serving you.